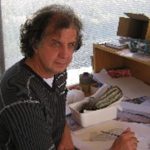 Gerhard Marx is a South African artist, illustrator and succulent enthusiast and breeder. Although the main emphasis of his artwork is focused upon succulent-botanical subjects, his versatile productivity included abstract and realistic painting in oils, acrylic and watercolour, illustrations for dozens of children’s books and caricature illustration as well as two and three-dimensional paleontological reconstructions for museum displays.

The botanical artwork of Gerhard ranges from semi-arid landscapes in oil and acrylic to detailed watercolour renderings of succulent plants, many of which were reproduced in books on succulent plants. His paintings are represented in International private collections as well as in the collections of Standard Bank South Africa and Kirstenbosch Botanical Gardens in Cape Town.

Both two and three dimensional reconstructions of prehistoric southern African fauna and flora were produced for the Albany Museum , Natural History in Grahamstown, South Africa. The life-size reconstruction of the Southern African prosauropod dinosaur Massospondylus carinatus on permanent display at the Geological Survey Museum in Windhoek, Namibia is also by Gerhard Marx as well as some two and three-dimensional palaeontological artworks on display at the Kitsching Museum in Nieu-Bethesda in the Great Karoo.

In addition to botanical artwork, Gerhard Marx is also an author of scientific and popular articles on succulents. He has formally published several new Euphorbia species (E. astrophora J.G. Marx, E. suppressa J.G. Marx, E. gamkensis J.G. Marx and E. audissouii J.G. Marx) . He also published Haworthia obserata J.G. Marx and co-authored the description of Haworthia truteriorum I. Breuer and G. Marx. The rare Haworthia marxii S.D. Gildenhuys was published in his honour.
Gerhard was born in 1956 and completed a BA Fine Arts degree at the University of Pretoria in 1979.

During 1984 to 1999 he worked as exhibitions designer and artist at the Albany Museum in Grahamstown and between 1999 and 2002 he worked in the USA as artist and plant propagator at Arid Lands Greenhouses. Since 2003 he has been living and working in the Little Karoo near Oudtshoorn in the Western Cape Province.